Well, Maybe not ALL 😉 But it is certainly a very exciting moment that Matt and I have been both praying and waiting for! WE BOUGHT A CAR YESTERDAY! Ok, so it’s actually a TRUCK. 🙂 We woke up in the morning at 5am (with the snooze button it was more like 5:20am.) We began our hike to Agustin’s house as we thought about a vehicle we had looked up online and called about the night before. Our friend Eduardo also joined us at Agustin’s and we all made the trip to the town closest to us: Aserri. Agustin was having some work done on his car by our new mechanic Jeffrey. Matt had met him last week through Agustin and he agreed to help us find a good vehicle! We LOVE Jeffrey! By the time we began looking at trucks Matt and I already knew we did not want the car we had planned on seeing. First we asked Jeffery about a truck we had looked at on the road to his house. The truck looked beautiful, had big ‘ol tires, was the model we were looking for, and we felt it must have been a sign since it was on our path. We are so grateful we had him to steer us away from this truck! He explained to us that often times when a vehicle has been lifted higher than it’s original design and given monster tires, there are almost always troubles down the road. He agreed that it looks awesome and powerful, but it really is not a good idea. I remembered a time when one of my brothers bought a lifted monster wheel vehicle and it did not turn out well for him. (Something about a piston shooting through the engine only like a week after he bought it, yikes!) Thanks to the advice of our friend and the memory of my older brother’s experience, we agreed to look at some different options. Jeffrey not only knows about cars, he also knows where to find them. We went to a dealer nearby who had 3 options that fit exactly what we were looking for. One clearly stood out and Jeffrey went along for a ride with us and the seller as he listened to and inspected everything on the car. With his review of the car we were certain that this was exactly the car we wanted. After some price negotiation done by our very own Agustin, a trip to the lawyer’s office, a visit to our Costa Rican Bank, and finally a return journey back to the vehicle we are the new official owners of a Toyota Hilux in Costa Rica! We want to say thank you to everyone who has been praying specifically for this, even before we left the the states. The experience was surprisingly low stress from what I was expecting, and even though there were many lengthy steps involved, we were so happy to have the peace of God and the help of our friends. The wildest part of the whole experience was our trip to the bank. Up until today we have not needed to take out a large amount of cash from our account; today we saw a whole new world! First we got a ticket and waited for our number to be called. We then went to a booth where we picked up a telephone and did our entire transaction through a two-way camera and one of those awesome mail-tube-vacuums! As if this wasn’t enough of an experience, we have also never had the privilege of feeling like millionaires. While it wasn’t in dollars 4,600,000 colones sure feels like millions of dollars! I think we could actually see ourselves aging as the poor cashier counted out every last bill to us on the screen and then had to send it to us via 3 different vacuum canisters!

While we were waiting for Agustin’s car to have work done on it, the four of us walked to a park in Aserri. Matt and Agustin had walked to this same park the week before and both times we found divine opportunities waiting for us there. The first time the guys met a group of youth who were practicing their parkour skills and who were very eager to talk with them about God and learning English. This time we met a lady named Cindy who was rescued from a life of 20 years on the streets doing drugs into a life of sharing Jesus with others. We were sitting playing dominoes in the very spot she usually paints kids faces and shares the love of Jesus with people. She considers herself a full time proclaimer of the grace of God and has a heart especially for people who are on the streets. We also met two pastors and a young lady who were also at the park that day to share the news of Jesus’ love. We were so encouraged and were able to obtain contact information for each of our new friends. It was also a great time spending the day with Eduardo and building our friendship with him.

One evening last week we had dinner and coffee at our friend George’s house. many of our other friends were also there. It was quite the gathering! We had a great time visiting with his family and friends as well as seeing their beautiful home and landscaping/gardening. One of the friend’s family own’s a restaurant on the mountain and she is very interested in learning English as well as guitar. In fact, two of the others who were there that night also want to learn guitar! Yesterday George called me and said they were all ready to start lessons so we picked Tuesdays at 4 to have guitar class! I love that they were so inspired to organize among themselves and call to arrange a time. I have been spending a lot of time since then figuring out how I am going to teach guitar now! I have found some neat resources online that teach guitar in Spanish, but I could definitely use prayer! They use different note names in most Latin and Central American cultures than in the US so I have had my fair amount of studying going on! Instead of CDEFGAB, I am now learning to use DoReMiFaSolLaSi. Eduardo will also be coming to class, and possibly one other young girl who has started learning a little guitar after bible studies.

The restaurant that our friend’s family owns is not currently running, but hey have a sugar cane mill that is! Matt was invited to come help with the sugar cane processing one morning! First they run the sugar cane stocks through the grinder, then the juice is mixed with a certain kind of tree bark resin that helps to draw any impurities out of the juice. That then travels down a pipe into a great big boiler with a fire underneath. The stove is built down in the floor and they feed the fire mainly with dried sugar cane stocks from the previous crop. While the sugar cane boils and caramelizes, they quickly put their hand in the boiling mixture and then rush to put their hand into water to be able to feel when it has reached the correct consistency without getting burned. Yes, Matt tried this too, but not with quite as much success as the pros. 😉 After it is heated, the boiling sugar cane is poured into a trough where it can be stirred and cooled slightly before being poured into wooden molds. After it hardens, the molds are flipped upside down and out pop “tapa de dulce!” Throughout the process Matt was given samples of the sugar cane to taste, he had it raw, he had it in juice, he had it while boiling, and he had two tastes of it while it was hardening. I never thought I would hear Matt say he had eaten too much sugar, but this was a day for the record books. He didn’t want anything sweet at all for an entire day!

We moved back into our house about a week ago after we finished sealing our bedroom. It has been so nice to be staying over there; I already feel more settled in. Matt made us a headboard for our bed-frame which I think is amazing. I was surprised at what a difference a head board and a warm room makes to my sleep quality. Bellow is a picture of our hand-crafted head board; I simply couldn’t post this without giving credit to my Grandma Barbara Norman for her beautiful quilt skills. 😉 The first few nights we would have a rousing-round of cockroach hunting with a shop vac, ladder, and sticks before bed time, but with our more frequent presence and the cockroach poison the bugs are thankfully giving our home back over to us. I am really glad the bugs seem to be dissipating; I wasn’t sure how much more of that adrenaline-skin-crawling feeling I could take. 😉 I thought I had learned my lesson about shaking out my clothes before getting dressed on a trip a few years ago when, to my horror, a cockroach started wiggling in my jeans while I was wearing them, but some things slip your mind when you’re doing routine tasks. I had just gotten dressed when a spider about the size of a fifty-cent piece fell out the bottom of my shorts! My skin is still crawling now as I remember it!

We also had the opportunity to see a mountain coati up close. Matt had seen a whole pack of them about a month ago. They were making all sorts of grunting noises and Matt was left to imagine what kind of snarling beast was about to appear out of the trees to eat him. Well when he did see their dim outlines and realized they were fuzzy little creatures we promptly looked up what they could be. Even though they are fuzzy, we read they can still be vicious, similar to a raccoon. Since then I have been hoping to at least see one of the cute creatures. We were washing dishes one day when something pretty loud hit the side of the building. This was followed by some grunting and rustling sounds. We both cautiously peered out the kitchen window trying to see without opening the door what was out there. we finally spotted the fuzzy little guy and I quickly ran to grab the camera. He was foraging on the hillside for goodies when he pushed a rock down the hill that hit the building. I am so glad he did; we were able to watch him for a about 5 minutes before we ventured to get a better look outside and we scared him away. They usually travel in groups so I was surprised he was all alone, but we were grateful for the visit. 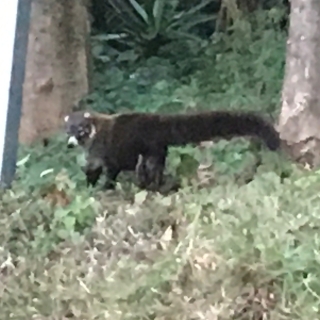 Thank you so much for your continued prayers. We would love prayer for the music class, the weekly Bible studies, safety while working on projects here and with neighbors, rich Jesus time, how to begin English classes with those who are asking, and continued growth in our relationships. We desire that everything we do would be a reflection of God’s love and that we would take the opportunities to share His truth unhindered. We also know we are so lame at doing this with out Him; please pray that we would constantly recognize our need for Him to be doing the work. Matt will also be learning to better his Manual driving skills so prayer for safety and success. Finally, please keep the continued residency process lifted up, as well as a small trip to Nicaragua to renew our visas at the end of this month.